2 day after a historic Davis Cup victory for Switzerland I had the honour and pleasure to be invited by Audemars Piguet to meet the man of the hour, Stanislas Wawrinka.

How it all began

Waiting for the man 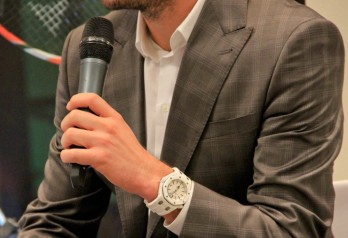 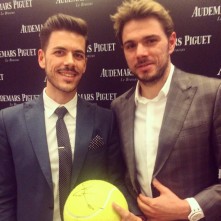 In a stylish and intimate setting, I had the unique opportunity to attend an interview conducted by François-Henry Bennahmias; CEO of Audemars Piguet, and Stan Wawrinka; for many the best player of the Davis Cup.

As expected the interview started with innocent questions and it was clear that things would remain civilized. What a pity! I am pretty sure that Stan would have some interesting stories to tell – even if they are in French. But the occasion called for a celebration and Stan is already such a pro at every level that he wouldn’t commit to any bold statements in front of the press.

He talked about mental toughness, the burden to replace Roger during the cup due to his last-minute injury (which didn’t happen at the end), the mixed feelings of having to step on the court in a potential decisive Game 5 (which didn’t happen either but would have been a deserved icing on the cake for him). No spectacular insights so far. He even managed to circumvent the question regarding the dispute with the French team in an elegant manner. He said to have been in the center of attention because he was the only guy on the Swiss team speaking French and therefore able to defend the verbal attacks. If you ask me, he should have pulled an Anelka on those cry babies and wave them goodbye with his Audemars-wearing left arm… keeping the right hand ready for some after-game backhand slaps if necessary.

The most “controversial” answer during the interview was given when asked about the young talents in Swiss Tennis. Something must have happened behind closed doors because he criticized the lack of sacrifice and committment of some players. Understanding where Stan is coming from- he was never ranked as top player during his junior years and according to himself his only talent is hard work and persistence it is understandable to hear such a sentence:

“[…] In my younger years I would have been thrilled to have the chance to practice with guys like Roger and myself even if I wouldn’t make the team at the end. […]”

The most honest moment was when Stan was asked if he believed that he could become Nr. 1 in men’s tennis. The answer was a spontaneous “no”. To admit this as pro player is not only brave but shows also a very human side. It doesn’t men that he won’t strive to be the best player he can possibly be, but it shows that he is realistic and down-to-earth. He knows that the omnipotent triumvirate is possibly out of reach at 29, but at least he knows now that on any given Sunday anything can happen…

So what’s next for Stan? Well, he will continue in his role as ambassador for Audemars as member of a very selected club of sportsman such as Messi, Lebron or Nick Faldo amongst others. Life could be worse than sporting a new all-white Royal Oak Offshore Ceramic Diver while enjoying the limelight. For right now it will be a lot of signing autographs, smiling at cameras and champagne. Title defence in 2015? Maybe, maybe not. Who cares if you are THE MAN. Bravo Stan!

The Pool. Had a great evening. You guys rock!