In 2012 the Times restaurant in trendy district 4 of Zurich opened its (garage) doors. With a highly acclaimed young cook, that had received an award as best newcomer in 2001, and a lot of noise in the media the basic requirements were given to be succesful. 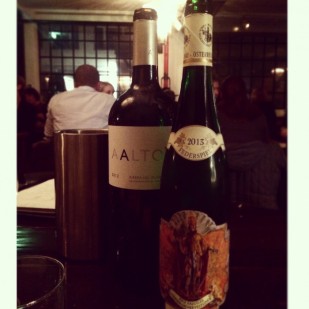 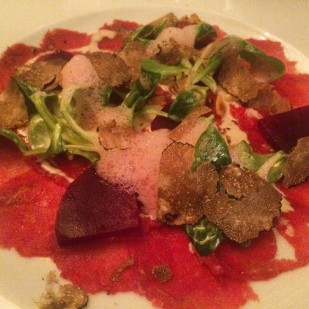 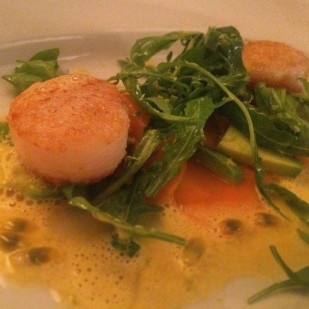 So I visited the place shortly after the opening night for dinner with my date and was not very impressed. The food was good, but not overwhelming-at least not what I had ordered back then- and the prices seemed too steep for a garage converted into restaurant place. Of course I may be complaining on a high-level here, but I judge the place according to its own standards. Therefore it was not very surprising that the direction and strategy had to be adjusted.

Batman left for St. Moritz and Robin the sous-chef a.k.a. Stephan Haas had to fill the gap. The new concept now focuses on the restaurant itself and not any longer on a name, which takes away some pressure for the new guy and also had the pleasant side-effect that the prices were lowered; or in their words: adjusted.

Last Friday I decided to give the place a second try and tried to be as unbiased as possible.

The wine was excellent. The Austrian Federspiel as well as the Spanish Aalto are always no-brainers and most people at the table will enjoy them. This is a safe bet and not much of an experiment but at least it is a good start into the night.

I decided to go for the 3 course menu from which I selected the beef carpaccio and the scallops as first dishes and the fish as main course since I wasn’t in the mood for deer that night although it is the season now. I am always very reluctant to choose lamb or deer because if it only tastes a little bit like a wet goat in the forest it ruins my night. So unless you know it will be made perfectly using quality meat keep away from it (I will come back to this later on).

My dinner was good; not so good that I had to kill the cook to restore the balance in Zurich; but there was nothing wrong with it. I may have been a little to unexcited, but then again better this way as too experimental and fancy. In essence there is still some room for improvement but it was in my opinion on the same level as in 2012, which puts the performance of the kitchen in the correct place and the chef as a worthy successor.

And I really need to award an extra point here for the açai sorbet that was served between courses. Saudades do Rio!

So what happened to the deer? Well, let’s say that the deer most probably had an affair with a goat before landing on the plate. But this is a story for my friend’s to tell. Always stick to your stomach feeling.